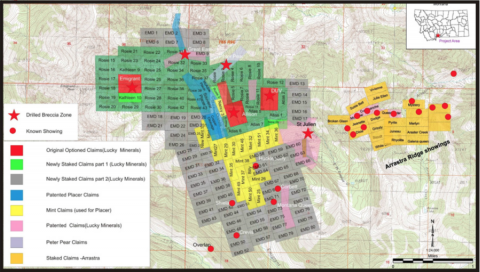 This map shows the claims Lucky Minerals has staked near Emigrant Peak.

The Canadian mining company that wants to look for gold in Emigrant Gulch has pulled the federal land portion of its mining application after deciding the level of environmental review was too much.

Lucky Minerals Inc. told the U.S. Forest Service it would withdraw the federal land part of its mineral exploration application after learning what level of environmental review the agencies would put the project through, which was a step higher than the company wanted.

Lucky Vice President Shaun Dykes said Tuesday that the level of review the agencies landed on was unnecessary, too costly and would take too long.

“We can’t afford to wait three years,” Dykes said, adding that the Forest Service caved to political pressure and “took the easy way out.”

A separate application for exploration on private land is pending with the Montana Department of Environmental Quality. DEQ public policy director Kristi Ponozzo said the department hasn’t decided how it would move forward with that proposal. Originally they planned to do a joint analysis with the Forest Service. Now that the Forest Service portion has been pulled, they will re-evaluate.

“We haven’t made any decisions about how we will move forward,” she said.

Dykes said he hopes the company can begin work on the private land next summer, but whether that will happen is unclear.

“What we need to do is drill on the private land, get some confidence of what’s there, then we submit a new multi-year plan,” he said.

Locals and environmental groups took pleasure in the company’s withdrawal of the federal application, calling it a “victory for the community,” but they don’t plan to let up in their opposition to the company’s plans on private land.

This whole brouhaha began earlier this year when Lucky applied for an exploration permit on Forest Service land in the Emigrant area just north of Yellowstone National Park. The company sought a categorical exclusion — the lowest level of environmental analysis.

The company has staked 2,500 acres’ worth of claims in the area and company documents say the project’s goal is a “multi-million ounce gold property” with copper and silver byproducts.

The original application to the Forest Service said they wanted to start work last summer, but opposition from locals and environmental groups — led by the Park County Environmental Council and Greater Yellowstone Coalition — prompted the government agencies to extend public comment periods into August and delayed the decision on environmental review.

Opponents of the proposal say exploration would only lead to a massive gold mine that could harm wildlife or water quality in the area.

“This is not the right place for a gold mine,” said Caroline Byrd, executive director of the Greater Yellowstone Coalition.

Dykes disputed the opposition’s claims all along and said there are no real environmental concerns with the exploration proposal. He also said the outcry was unfounded and came at the wrong time, because the company was applying only to look for gold, not dig an open-pit mine.

“They’ve got no right to stop us from exploring,” he said.

The environmental groups rallied local business owners and residents to oppose the project, many of whom were happy the company pulled its federal application.

“I think it’s a huge victory for the community,” said Colin Davis, the owner of Chico Hot Springs.

But they aren’t ready to say it’s over, especially since the company still has an active application with DEQ.

“Ultimately, I don’t think that they’re just going to roll over and go away,” said Dale Sexton, the owner of Timber Trails in Livingston.

Mining has been happening in Emigrant Gulch since the late 1800s, and Dykes has said the company thinks it can do better than the rest because they plan to drill deeper during exploration, about 2,000 feet. He said they just want to know what’s up there.

“Until the questions are answered up there,” Dykes said, “exploration companies are going to keep on coming back.”

DEQ has yet to establish a timeline for when it will decide what to do with Lucky’s proposal. Ponozzo said it will involve some level of environmental analysis and likely an opportunity for the public to weigh in.

“We’ll be having more conversations and talking with the company and figuring out what exactly it is that we’ll be doing as far as an analysis,” Ponozzo said.